Back in December I decided to pick up this blog again for the new year. Then the war happened (Gaza), and by the time it ended, I had to get busy writing a big piece on Mahmoud Darwish, Samih al-Qasim, and Taha Muhammad Ali for Parnassus. Then my son's Bar Mitzvah hit, and the big Purim performance by our synagogue's house band, the Alte Rockers, for which I've become the rhythm guitarist and songwriter. Then the vote went against me for promotion to Full Professor--too few publications in peer-reviewed journals; too little committee work--and...well, let's just say it's been a long five months.

Here's a taste of the Alte Rockers in action, performing one of my own compositions: "You Shuckled (All Night Long)":

During this time, our own Jerome Rothenberg started a blog, Poems and Poetics, which I've added to the links list on the right. It's pretty amazing: like one of his anthologies evolving in real time. I've let it slide too long, but now have the pleasure of binging on it. You can, too!

Jerry also has a couple of new books out, both worth knowing. First, we have this:

a third volume (although it's a sort of prequel) of the Poems for the Millennium anthology series, this one a book of "Romantic and Postromantic Poetry." You can read through the table of contents here, and as you'll see, it's a pretty wonderful gathering, the sort of book I won't just take on in the classroom (as I have the previous volumes), but will also read by myself, for pleasure, and as a reminder of what poetry promised me when we both (alas!) were young.

The second book from Jerry is 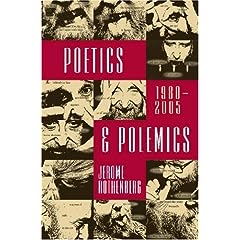 Poetics and Polemics: 1980-2005, a collection of essays, commentaries, interviews, etc., which will be as rich a resource as anyone interested in Jewish poetry could ask.

Hmmm... No, that's too blurby, too abstract.

Let's be honest--I'm thinking about these books today because it was reading Jerry's Big Jewish Book back in '78 that showed me there was room for a scoffer, blasphemer, and heretic like me, not just at the margins, but at the heart of Jewish tradition. The uglier and more repressive the current Israeli government gets--Lenny Bruce! Thou shoulds't be living at this hour--, with the latest bill proposing to imprison those who provoke "scorn" for Israel as a Jewish-and-democratic-state (can someone give me the German for that compound? It feels needed), and the more disappointed I get in my children's former Hebrew school (I've pulled them both out for next year), the more I need another dose of that: something even stronger, more substantial, than the dose I can get from tugging on a "Jews for Asherah" trucker's cap. (Speaking of which, did anyone else read this piece in Zeek about Jews, Goddesses, and the Zohar? Not bad, but to me, old news--thanks to Jerry, first among many. Why does this stuff have to be re-discovered, decade after decade?)

Another new book came out, which I've yet to read: Yermiyahu Ahron Taub's What Stillness Illuminated / Vos Shtilkeyt hot Beloykhtn, a suite of five-line poems in English, Yiddish, & Hebrew "inspired by the poet's experience as an artist's model." You can find samples here, and they're not what you might expect from that description--looks like a mysterious, evocative book, and I look forward to getting my hands on it.

Months ago I read and enjoyed Things on Which I've Stumbled, by Peter Cole. Will get back to that and write about it; for now, a mention will suffice.

OK, petering out here, clearly. But it's nearly erev Shavuot, and I've wanted to get back on line here for a while. Let this post mark that return, even if it doesn't do any job particularly well.

Good to see you around these parts again.

Sorry to hear the promotion didn't go through. As a fellow academic, I understand the pain that creates.