Nobody Tells Me Anything dept.

Take a look at this:

What does it mean to create Jewish culture and perform Jewish identity in Europe and North America in the twenty-first century? Ranging from the klezmer revival in the clubs of Warsaw to the Lower East Side irreverence of Heeb magazine, the ReJewvenation conference will create a space for scholarly discussion of a Jewish cultural renaissance in the making. This conference will bring together a diverse group of scholars and artists in order to address six major aspects of contemporary Jewish culture: ritual, music, new media, visual arts, literature and performing arts. Some of the questions the conference will address include: What does it mean to be part of a Jewish diaspora culture in a global village? How does twenty-first-century Jewish culture negotiate the ever-shifting boundary between religion and secular life or between culture and religion? How have changing attitudes toward gender roles and homosexuality fundamentally re-shaped Jewish culture? What impact has the internet had on the creation (and reception) of Jewish culture? How does the ongoing dialogue among diaspora Jews about Israeli politics and culture manifest itself in contemporary Jewish culture? To what extent do twentieth-century events – such as East European immigration to North America , the Holocaust, and the rise and fall of the Soviet Union – still have an impact on the creation of Jewish culture in the twenty-first century?

Why didn't I know about this? Where do I sign up to keep up with such things? If you're out there, and plan to go, let me know how it went!

More soon, including a long message from Robert about Jewish American poetry, which has languished in my inbox for a month now. Sorry, Robert! I'll get it up here soon, with responses, I promise!

And now that Yom Kippur is past, here's a lovely poem for Sukkot, by Nan Cohen, from Rope Bridge.

Every house on earth a broken house.
Every city a ruined city
Poughed under by that slow disaster, time.
If ever redeemed to us, then by the same.
Your walls will fall, are falling, have fallen.
Your roof is open to the countless stars.

I count at least three successive echoes in those six lines: to Eliot, to H.D., and to a Japanese poem that Jane Hirschfield translated, whose title and author now escape me. It's as though those poets were the Ushpizin, the guests, she had invited to the poem; I suspect there may be more. Nice work, Nan!

The best Jewish poem I know for Yom Kippur--the one that stays with me, anyway, the most richly and beautifully, year after year--is actually two prose paragraphs from Mike Heller's memoir Living Root. Read it and be well this year, all of you out there:

My mother who did not believe in God, who told me this fact when I was only nine as we lolled in the shallow waves off the beach at . My mother who said "I am an atheist" under the clearest of blue skies, when not the merest wisp of haze or cumulus lay in the way between heaven and earth: My mother, who suffered numerous illnesses, a series of different cancers, a bad heart, and finally a death‑dealing stroke, my mother, who yet outlived three of her doctors and led an active and social life, who had closets of dresses, who walked with dignity up steps, taking ten seconds to rest at each landing, this mother was immensely proud of her teeth. In the morning and in the evening, she spent many minutes in the bathroom flossing and brushing; at night, while we children lay in bed, we could hear her gargling. My mother pestered the butcher for soup bones which she would boil up, not for soup, but to chew on. My mother, who was very conscious of her appearance and so dressed smartly and even elegantly on most occasions, would sit by herself at the diningroom table in the late afternoons with a large billowing napkin tucked into the neck of her housedress and gnaw like a dog on those cooked bones. When out having lunch with a friend or with us, she always excused herself at the end of a meal and retired to the ladies' room to brush her teeth. How astonishing her pride in those teeth while the rest of her body was failing her.

On the Day of Atonement, when the litany of Jewish suffering is recited in the synagogue and as a young child, just after the Second World War aware of the Holocaust, and feeling the entire world massed against Jews, feeling my own vulnerability, when the rest of the family engaged in the ritual fasting, in bringing neither liquid nor food to one's lips and mouth, my mother, because of her health, was required to eat, and so, required herself to brush her teeth. In the temple, surrounded by all the fasting relatives and family friends, in a cloud of bad breath, only my mother's mouth as she kissed me had any sweetness. 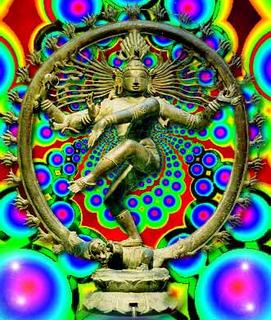 Pardon my cynicism, everyone--I'm really a very sweet guy!--but after all the hoopla I've been hearing about "God's October Surprise," last weekend's earthquake comes as a pretty low blow from He Who Must Not Be Named.

That was the surprise? Gee, thanks. If I'd have known, I'd have spent Rosh Hashanah singing hymns to Shiva.

On a happier note, last week I was invited to the Poetry Foundation's Pegasus Awards banquet at Millennium Park here in Chicago. Cocktails chatting with Rosellen Brown and Marv Hoffman; dinner on the stage of Pritzker Pavillion (all those empty seats!); and, on every plate, a swellegant, elegant, brand new copy of Samuel Menashe's New and Selected Poems, freshly published by the Library of America as part of the Foundations' "Neglected Master" series, with an introduction by the great British critic Christopher Ricks, he most recently of Dylan's Visions of Sin. (Menashe had another New and Selected published a few years back, called The Niche Narrows, published by Talisman House.)

Menashe is an odd sort of poet. He writes short poems, mostly, whose density of sound reminds me a little of Lorine Niedecker or even my beloved Ronald Johnson, but without the playfulness of either. Instead, he's rather somber, even when protesting his happiness and desire to please. As a Jewish poet, he's also rather odd: willfully prophetic, but in a way that lacks the idiosyncratic dazzle--the sense that this poem needs to be said no matter its strangenessthat you find in, say, Allen Grossman. (This isn't a bad thing, always--I often find Grossman labored, and hard to read at length--but I toss it out as an initial response.) Grace Shulman said somewhere that his Jerusalem poems were no more Jewish than Blake's were. That strikes the right note, I think.

You can find an interview with Menashe here, at the Poetry site, with links to a fistful of poems; an essay on him by Dana Gioia here; and if you want some poems, here's an early, unobjectionable one--the title poem of his first book, but not one of his more satisfying poems, over the long haul, I think--

and here are a couple of his more recent pieces, which I prefer:

Here and there
White hairs appear
On my chest--
Age seasons me
Gives me zest--
I am a sage
In the making
Sprinkled, shaking

That spoon fell out
Of my mother's mouth
Before I was born,
But I was endowed
With a tuning fork

A note from Norman--the link is only for audio. Sure they're handsome fellers, too! Ah, well.

Here's a two-part number from Shapiro's How Charlie Shavers Died and Other Poems. (I hear tell a Collected Poems is in the works from Wesleyan in January!) Gee, Mom, do you think these count as Jewish poems?

1.
Caught on a side street
in heavy traffic, I said
to the cabbie, I should
have walked. He replied,
I should have been a doctor.

2.
When can I get on the 11:33
I ask the guy in the information booth
at the Atlantic Avenue Station.
When they open the doors, he says.
I am home among my people.

The video in question is another RealVideo link, this one via Norman Finkelstein:

"Harvey Shapiro and I read and discussed the Objectivists at Kelly Writers House at Penn last week. An ineluctably Jewish affair, even when it wasn't, if you know what I mean. You can find the evidence here."

The scary thing is, I do know what he means. So why is it so hard to put into words? Here's hoping that the new collection of essays on my desk, Who We Are: On Being (and Not Being) a Jewish American Writer, will shed some light on the subject, even if not one of the essayists--surprise, surprise--is a poet. 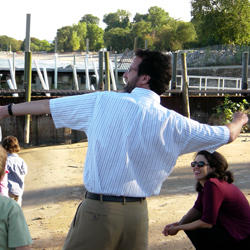 Hello, everyone. Thanks for checking back in with me--I know it's been a while.

As I was saying, it's been a while. The wrists have been bugging me, although my new office setup has reduced the carpal tunnel aches & pains. And I've been up to my peyes in unrelated projects: my Romance Novel class, my new and improved--well, my new--Intro to Poetry Class, my graduate Teaching Poetry gig, and the great joy of my life right now, my new oud: a "quality learner oud" made by Haluk Eraydin of Turkey. (Although I'm seriously contemplating stringing it for Arabic tuning. But maybe that's wrong of me. And will it hurt the oud? Many an hour recently over at Mike's Oud Forum sniffing out the answers to such questions.)

Still, with the Hi-Hos upon us--as in, "Hi-ho, hi-ho, it's off to shul we go"--this blog has been, like the proverbial Mama, on my mind. And although there's no tradition of "new year's resolutions" at Rosh Hashanah time, other than the usual u'tshuvah, u'tefilla, u'tzedakah trio, I'm going to try to get back to regular blogging here, at least some squib every couple of days, whether a poem or a thought or a link. Hmmm... Maybe I'll toss the reflections on oudism here as well, since it was things Jewish that brought me to the instrument. Make a few converts, maybe.

OK: off to get washed clean in the... Oops! Wrong metaphor. Off to engage in a little off-shore sin disposal. It's been quite a year, folks, so if you see a forty-something bearded man in glasses slinging a large pepperoni, thin-crust, frisbee-style out into Lake Michigan, that would be me.

And, since no religion truly satisfies the soul, year in and year out, like the Church of Baseball, let me simply add: Go Sox! (You pick the color.)
Posted by E. M. Selinger at 9:04 AM 1 comment: