Disengaging (until the 15th) 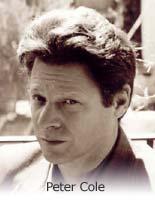 Sorry, I couldn't resist! No, I'm not pulling out of the blogosphere permanently, but I am going on hiatus for 10 days or so--off to the North Woods for a spell, where I'll miss whatever mischief the Yiddishe Orange Order has in store. While I'm there, I'll mull over where to take this blog next, AND how to spread the word about it, once I'm posting more frequently. If you have any marketing ideas, let me know.

When I get back, I'll post about the poems and other work that Adam Schonbrun was kind enough to send me, as well as about the new books by Nan Cohen and others that are en route as we speak, and on Josh Corey's continuing evolution as a Jewish-American poet-blogger.

For now, as I leave, this poem, by Aharon Shabtai, translated by that handsome fellow in the corner, Peter Cole. It was published in Parnassus not long ago; if you're reading this, the pun throughout on "Hatikva" is probably clear enough to go without mentioning, so I won't mention it. (Grin.) Peter, let me know if you'd like me to take this down when I get back--until then:

It's hopeless, you told me,
waking in the middle of the night--
the moonlight drifting
in through the curtain--
and you looked at your wife,
at her thin, whitening shoulders¶
and dark hair
as she was slowly breathing,
thinking again and again
of all this evil,
the loss amassed in the soured heart
day after day, for two years and more.
It was in Karmei Avdat.
I rose, you said,
and without my glasses
went out barefoot onto the gravel
to a bench we'd moved
against the shed
and sat there in my underwear,
staring out toward the side of the hill.
Along that slope, I told you,
five million stones have been cast:
the stones will always be stones,
no good will ever come
of them or to them--
not in another two years,
and not in a hundred.
But if you shift your eyes
even a meter to the side,
you'll see a plant
with five tomatoes.
That's where you should look.
These vile people
will acquire
plane after plane
and bomb after bomb,
and more will be wounded and killed,
more be ruined and uprooted;
for this is all they are capable of,
and not tomorrow, and not forever,
will any good come
of them or to them,
for evil holds no promise
and possesses neither the life nor yield
contained in a single tomato.
When I think of this land,
love flows through my heart.
When I think of Amira and Neta,
and Rachel in her orange parka--
and not of the pus of the cruel
or their barking,
and their boom boom boom--
but this substance,
this certain serum
that's secreted in me
and throughout the world gives rise
to building, repair, and enlightenment,
counsel and cooperation,
this is the hope
that lends me a place and ground
in which to send out a bold root
there, beyond that heap of stones
at the Mas'ha checkpoint,
at the store run by the old grocer
with the white skullcap
who stands by the door
with plates of labneh
which he takes out of the rickety fridge;
and this is the longing and yearning
to go down into the village groves
and through the breach in the barbed-wire fence,
to cross the ditch--
turning my back
to the land-grabbers' contractor
who, with his guards,
peers out from the jeep
at the burrowing bulldozer--
and like someone in Florence
climbing to the top
of Brunelleschi's dome,
to mount that hill
and, under the tree beside the tent,
to sit with Riziq and Nazeeh,
to look into Nazeeh's face,
at his toenails and black sandal,
to see Riziq's cigarette--
this is hope--
and with Nazeeh and Riziq
to look out far beyond the fence,
beyond the barbarity,
toward the border of humanity.

The best way I know to publicize a blog is to spend time reading other blogs and leaving relevant comments on them. If somebody posts a thoughtful comment on VR, I usually click over to see their blog, and if their blog strikes my fancy, I bookmark it or add it to my aggregator (and after I've been reading it for a while, if I like it and if it relates to my subject matter, I add it to my blogroll.)

It's time-consuming, but also pretty fun...

I want to ask you to help me with something, there is this anti semite shithead Presbytaria Minister who has an anti Isreal blog.

Some of us are trying to talk some sense into him but we need your help.