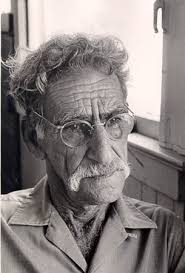 The Music of Thought in the Poetry of George Oppen and William Bronk, by Henry Weinfield, has just been published by the University of Iowa Press. I can't really write a review here, since as Henry notes in his Introduction, Steve Fredman and I spent "considerable time and effort...reading and commenting on the manuscript of this book at every stage of the process." I can, however, give you my blurb: “Henry Weinfield’s The Music of Thought is a penetrating study of two of the most significant American poets of the second half of the twentieth century. The author implicitly demonstrates that modern poetry, which for some has been overshadowed by other literary genres and recent developments in the media, still speaks to the central concerns of our society. After reading this book, one can see that poetry still counts. This is an essential book for the study of modern poetry.” Better yet, here is a remarkably perceptive passage from Henry's discussion of Oppen's most famous poem, "Psalm":

Oppen's "Psalm" is a genuine poem of praise for our time, not merely a sentimental effusion, and in an Age of Irony, such as we continue to inhabit, to have written a poem of praise that does not offend the intellect is a considerable achievement. Oppen's God has the decency not to exist (or, like Spinoza's Deus sive Natura, to exist only as nature), and for this reason we cannot very well accuse him of being wicked or uncaring. Oppen is thus the antithesis of a gnostic, and in the light of the Shoah it is not so easy to evade gnosticism. The world of Oppen's poem is not a fallen or an intrinsically evil world; nor, in the context of the world, do we as human beings have to resort to the doctrine of original sin to get God off the hook...Oppen's "Psalm" reconciles us to realities and enables us to live in the world.

The centerpiece of this wonderful book consists of two lengthy readings, one of Oppen's long poem Of Being Numerous, and the other of all the major poems in Bronk's Life Supports. So pardon me if I repeat myself: an essential book.

Posted by Norman Finkelstein at 11:24 AM

Looking forward to reading this book which, alas, seems to have been lost in the mail, or amazon.com decided to ship it to me via donkey.