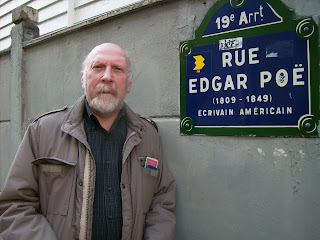 Michael Heller’s last two books of poetry, Wordflow (1997)and Exigent Futures (2003), are both volumes of new and selected poems, with some degree of overlap between them. So it is particularly exciting to have this collection of all new work—and what a beautiful book it is! An austere black-and-white production from Talisman House, decorated with the abstract drawings of Heller’s friend, the late sculptor Bradford Graves, Eschaton (the word, according to the OED, refers to “the divinely ordained climax of history,” as in “eschatology”) is a further chapter in the quest for the “difficult freedom” (to borrow from Lévinas) which for Heller constitutes poetic wisdom. This wisdom, half-Jewish, half-Buddhist, is found in spite of oneself, as in the opening couplet of the title poem: “I don’t know where spirit is, / outside or in, do I see it or not?” It is wisdom which comes to Heller through his dedication to cultural tradition, to everyday life, and to the careful turns of language that have always made his poetry such perfectly measured work.

At all points, it is a matter of responsibility. “One tries pulling syllables clean, like freeing / old nails from plaster” he notes in “The Chronicle Poet. And later in the same poem: “Useless, useless! Nothing / impedes thought’s passage more than an unuttered word, / one desperately cut short or untimely enough to have become stuck / where it makes only a shameful noise…” To avoid the stuck word, the unuttered word, Heller will take extraordinary risks. Often eschewing lyricism almost entirely (and here he remains true to his Objectivist heritage), he seeks instead “To find words as a kind of meeting place / even as they fly loose in unresisting air” (“From the Notes”). The poem, then, is an act of community, but still a gamble, a risk that may just as well come to naught. “How to put world there, at word-brink” he asks, “among so many lovely things that flow?” (“At Word-Brink”). It is there, in that flow, that the poet may find what he is looking for, but lose it as well.

One of Heller’s most important answers to this problem is found in the title of one of the last poems in the book: “Commentary Is the Concept of Order for the Spiritual World.” Here, as in a number of other important poems in the book, Heller reasserts the principle of commentary which, through many years of sustained practice, has made him one of the most important Jewish poets of our time. Commentary offers us “the salvaging uncertainties / in the world’s overriding syntax” (each line of this poem has a dramatic, signifying space, an emptiness in the center). Commentary both links us to tradition and sets us off on our own. This accounts, I think, for Heller’s extraordinary grace when it comes to reference, allusion and quotation in his work. He accepts that his poetry is a fold in a great conversation of commentary, that linguistic “meeting place” in which he posits his faith. And it is in this humble belief, inspiring his practice, that Heller’s poetry paradoxically achieves its magisterial power.
Posted by Norman Finkelstein at 9:06 PM