Countdown to The Book We've Been Waiting For... No, not Harry Potter. I mean the book--THE book--that I've long needed, about Zukofsky.

Fifteen years ago, Mark Scroggins and I were neighbors, nearly. He lived in Reston, I in Arlington, VA: close enough to meet for coffee and to talk, though not often enough, about poetry. We both loved Ronald Johnson--that was how we met--but after that, our tastes diverged. I leaned to the right, professing a love of Merrill and Auden. For Mark, the touchstone was always Louis Zukofsky, on whom he'd written a dissertation back at Cornell.

I got Mark to take a second look at my favorites, but Zuk always eluded me: one of those poets I felt I ought to love, but for various reasons (never quite clear to me, I'll confess), never did. I needed a hook, somehow: a text or tale to have in mind when I read the poems themselves, as I have Susan Howe's and Charles Bernstein's essays when I turn to their work, or Rene Stenke's novel Holy Skirts when I read the Baroness Elsa von Freytag-Loringhoven.

And now it's here, or almost here: 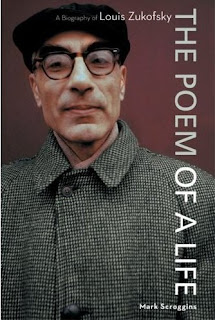 Louis Zukofsky: The Poem of a Life, by Mark Scroggins: a critical biography born (says Mark on his blog) from "7 or 8 years of grubbing in the archives (think Gandalf in the Minas Tirith scrolls basement, minus the pipe & tankard of ale), interviewing poets, writers, & folk of all walks of life from San Francisco to Edinburgh, and (mostly) bending over a legal pad or a word processor in a haze of tobacco smoke & caffeine."

I've read portions in draft: they're deftly written, critically subtle, and emotionally astute--in short, they're everything that I have needed to read Zukofsky for pleasure. To read him not least as a Jewish poet, let me add in these heimish confines.

For the last few years, we've all heard that Zukofsky was a crucial figure in twentieth-century American poetry, and still more in Jewish American poetry. This is the book, I reckon, that will clinch that case. I don't have the software handy to do a "countdown to publication" as they do for Harry P, but I'll be waiting for it to show up in my mailbox just as eagerly as my kids are waiting for HP & the Marshy Mallows. (Note to Mark: maybe you could photoshop a Z-shaped scar on L's forehead, just for the cover? He's got the glasses already!)
Posted by E. M. Selinger at 6:48 PM