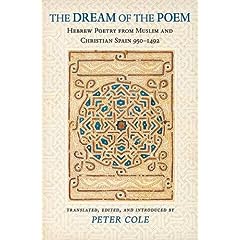 I don't know how many of you have already seen it, but there was a glowing review of Peter Cole's new anthology The Dream of the Poem: Hebrew Poetry from Muslim and Christian Spain, 950-1492 (Princeton UP) in the New York Times a few weeks back. Quoth Eric Ormsby:

One day in 10th-century Baghdad a visiting foreign student named Dunash Ben Labrat showed his teacher, the revered scholar Sa'adia Gaon, a poem he had composed in a novel style. Sa'adia handed the poem back with the comment ''Nothing like it has ever been seen in Israel.'' This dubious compliment, which all teachers of creative writing might wish to employ, failed to discourage Dunash. He took himself, and his new poetry, back home to Muslim Spain. There, despite the dismay his mediocre verses prompted in other aspiring Hebrew poets, his style caught on. Within a few decades, from these unpromising origins, a brilliant and original body of Hebrew verse began to take shape. Virtually stagnant since late Biblical times, Hebrew poetry and the language itself would be transformed by a succession of poets of genius and their imitators. In Peter Cole's rich new anthology, the extent of their astonishing achievement is fully revealed for the first time in English.

It's a beauty, this book, and I hear tell that even though Amazon says it will take 4-6 weeks to ship, they have them in stock. Find it somewhere, buy it, and let's talk!
Posted by E. M. Selinger at 12:16 PM

Marjorie Perloff reviews the book in the April/May Bookforum:
http://www.bookforum.com/perloff.html